A careful look at Armenia’s alliances reveals a disturbing picture.

While strategic alliances are crucial for ensuring any nation’s safety and security, they are particularly indispensable for relatively small countries. Israel, which has long faced diplomatic isolation and hostility among its neighbors, has relied on its relationships with the U.S. and other Western democracies to insulate the country from its enemies.

In that context, it would ordinarily be natural for Israelis and supporters of Israel worldwide to welcome the recent announcement that Armenia, a landlocked country in the Caucasus Mountains, will open an embassy in Israel. The full picture of Armenia’s alliances, however, raises serious concerns that should give the Jewish state pause before deepening ties.

On September 20 — the same day the new embassy was announced — Armenia hosted Lebanese Defense Minister Elias Bou Saab in Yerevan. Although many Western countries maintain ties with Lebanon, the country is still in a state of war with Israel, and, more importantly, the Lebanese government is largely under the control of the terrorist group Hezbollah. As such, the defense minister’s comments that he would share intelligence gathered from two Israeli drones that crashed during an apparent mission targeting Hezbollah last month are particularly troublesome for Israel.

Due to its location and size, Armenia has been enveloped in Russia’s sphere of influence for well over a century. Long after the fall of the Soviet Union, these ties continue to run deep, especially as Russian President Vladimir Putin has sought to reestablish Moscow’s preeminent position throughout Eastern Europe and Asia and views Armenia as lining its strategic underbelly. 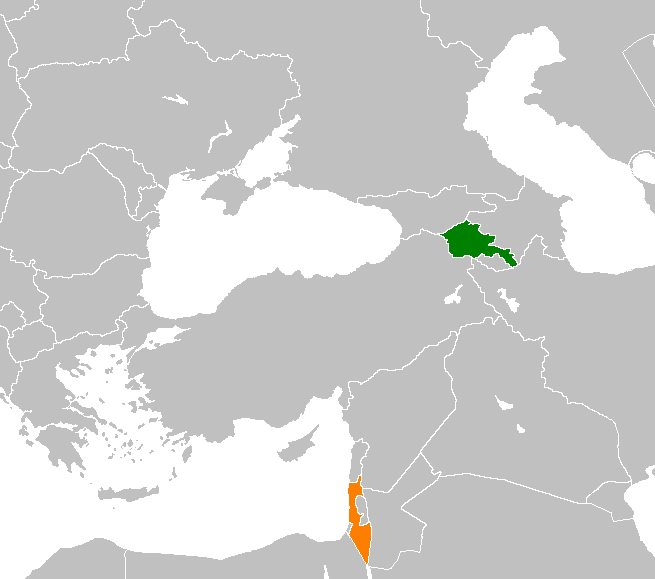 Even more troubling for Israel is Armenia’s support for the Russian-led intervention in the Syrian Civil War. Earlier this year, Armenia sent a contingent of soldiers to support the Russian military mission that is aiding Syrian dictator Bashar al-Assad. This move drew a formal rebuke from the U.S.

By signaling its backing for Russia and Assad, Armenia makes it clear that it has no qualms about the Assad regime’s rampant war crimes, use of chemical weapons, and human rights atrocities that have led to hundreds of thousands of civilian deaths and have forced thousands to flee. In the eyes of most of the civilized world, Assad is a war criminal, but Yerevan maintaining ties with the Syrian leader seems like business as usual.

To be sure, the Jewish state must have a working relationship with Russia due to the latter’s geostrategic might. Yet despite all the niceties between Prime Minister Benjamin Netanyahu and Putin, Russia has largely looked the other way as Iran and its terror proxy Hezbollah have opened a second front against Israel in Syria. Consequently, Armenia’s backing of Russia and Syria in the civil war places Yerevan squarely at odds with Israel’s interests and safety.

But Armenia’s warm relations with some of the world’s most notorious regimes don’t stop there. Armenia may also be offering Iran a way out of crippling U.S. sanctions. Last August, the U.S. imposed new sanctions on two Armenian companies — Yerevan Telecommunications Research Institute and the Markel company — for doing business with Iran. The sanctions followed a state visit by Armenian Prime Minister Nikol Pashinyan to Iran last February and booming trade between the two nations.

While Armenia has seemingly cozied up to some of Israel’s fiercest enemies, Armenian anti-Semitism is another serious issue for the Israelis to consider.

Earlier this year, 60 Armenian church students attempted to lynch two Jews on the eve of the Jewish holiday of Shavuot in Jerusalem. Meanwhile, research from reputable sources has shown high levels of anti-Semitism in Armenia. In an Anti-Defamation League study of anti-Semitic attitudes in 100 countries, Armenia received the third-highest anti-Semitism index score (58 percent) outside of the Middle East and North Africa. Additionally, a 2018 survey published by the Pew Research Center found that almost one-third of Armenians would not accept Jews as fellow citizens.

As long as Armenia undermines Israeli security interests and aligns itself with Israel’s adversaries, Jerusalem should remain significantly concerned and vigilant regarding its ties with Yerevan, regardless of the new embassy.

Paul Miller is president and executive director of the news and public-policy group Haym Salomon Center.