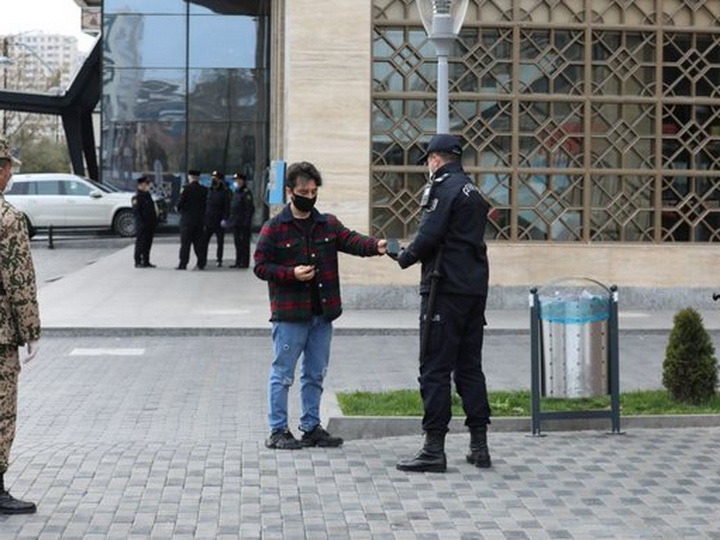 Thanks to having quickly adopted strict countermeasures, Azerbaijan, so far, appears to have succeeded in flattening the curve of new COVID-19 infections and slowing the domestic spread of the novel coronavirus responsible for this disease.

Tellingly, the number of recovered patients exceeded daily new infections on April 14 (62 versus 49, respectively). With restrictions on the movement of people in force since early March, it is believed that the peak of infection had already been reached.

Azerbaijan began imposing progressively strict constraints on its citizens’ normal activities immediately following February 28, when the first case of coronavirus infection was confirmed in the country (APA, February 28). On March 2, the government announced that educational institutions were to be closed until March 9, later pushing the date to March 27, eventually postponing it again, to April 20 (Azernews, March 8). Azerbaijan felt itself particularly insecure as the COVID-19 outbreak in neighboring Iran already seemed be spiraling out of control. Consequently, Baku closed its borders with the Islamic Republic on February 29, for a period originally planned to last until April 20 (BBC News—Azerbaijani service, March 25). Both the first infected case and the first death (recorded on March 12) were people who had recently returned from Iran (Azertag, March 12).

Over the following days, the state-imposed restrictions were expanded: starting on March 14, the government announced specific “social isolation” measures, including the cancelation of weddings, funerals, gatherings and large-scale events, the closure of cultural facilities such as cinemas, museums and theaters, as well as mandatory 9:00 P.M. closures of restaurants and cafes (Cabmin.gov.az, March 13).

On March 17, the authorities added a new clause to the criminal code, declaring punitive measures (fines of up to 5,000 manat, or $2,941, three years custodial restraint, or up to three years in prison) for those who violate the sanitary, hygiene and quarantine regimes (Report.az, March 19). Two days later, the government also set up a Fund to Support the Fight Against the Coronavirus, which, to date, has collected around 112 million manat ($65.88 million) (Covid19fund.gov.az, April 15).

Since the last week of March, more preventive measures were announced by the government’s special task force charged with responding to the COVID-19 threat. These included inter alia suspending the operation of large shopping centers (excluding grocery stores and pharmacies) for one month; prohibiting people over 65 to leave their homes; forbidding gatherings of more than ten people; banning inter-city and inter-district transportations (Jam-news, March 23); setting up a free messaging service that requires people to ask permission to leave their home via a cellular text message, for now in place only until April 20 (Trend, April 3); opening a new hospital with 70 intensive care units and, initially, 100 beds for coronavirus patients (Azernews, March 28); and suspending entry into and exit from Azerbaijan, via air and road transport, except for cargo transportation, during April 5–20 (Trend, April 4).

Azerbaijan adopted two social and economic packages, collectively totaling 2.5 billion manat ($1.47 billion) from the state budget, to mitigate the difficulties caused by the pandemic and sharp decline in the global energy prices. The packages will address the negative consequences of the coronavirus outbreak as well as the impact of volatility in the world energy and stock markets on Azerbaijan’s economy, macroeconomic stability, employment and businesses (President.az, March 19; Report, April 6).

Besides adopting these domestic measures, the government of Azerbaijan has also taken the initiative to try to organize a multilateral response to the pandemic together with its international partners. On March 6, when the coronavirus had yet to hit Azerbaijan, Baku declared it would donate $5 million in voluntary financial aid to the COVID-19 Solidarity Response Fund, administered as part of the Strategic Preparedness and Response Plan (SPRP) of the World Health Organization (WHO) (Azertag, March 6). Notably, this pledge surpassed donations made by numerous much larger economies than Azerbaijan (e.g., Canada—$729,903, Czech Republic—$258,176, France—$1,098,901) (Who.int, April 14).

Moreover, as the current chairperson of both the Non-Aligned Movement (NAM) and the Turkic Council, Baku is uniquely empowered to utilize these international forums to call for cross-border crisis responses and undertake important multilateral initiatives on fighting COVID-19. For instance, under Azerbaijan’s guidance, the Coordinating Bureau of the NAM adopted two Communiques regarding the pandemic, on March 25 and April 10.

The documents recognized the importance of all forms of international cooperation against the disease, emphasized the need for preserving and strengthening the values of multilateralism as well as of the spirit of solidarity in the face of this global emergency, and declared support for the WHO and its leadership (Namazerbaijan.org, April 6, 10).

Additionally, together with other participating governments, Baku has mobilized the resources of the Turkic Council, which brings together Azerbaijan, Kazakhstan, Kyrgyzstan, Turkey, Uzbekistan as well as observer state Hungary. On April 10, at the initiative of the Azerbaijani president, the Council’s members convened a virtual summit to discuss the theme of “Solidarity and Cooperation in the Fight Against the COVID-19 Pandemic” (Azertag, April 10).

The virtual Turkic Council summit highlighted the necessity for global solidarity and multilateralism to save lives and to minimize the negative social, economic, moral and psychological consequences of the pandemic. The participating states’ leaders reached an agreement for their respective ministers of health to exchange information, discuss national pandemic action plans, share expertise and treatment methods. Moreover, the Council members emphasized the need to sustain their economic and trade cooperation, and they promised to take all necessary measures to facilitate the passage of freight vehicles across their borders (Turkkon.org, April 10).

Indeed, the governments agreed that ensuring food security and stable supplies of essential goods was no less important than tamping down the trans-border spread of COVID-19—a highly notable joint stance in light of the widespread internal and inter-state travel shutdowns that were compelled and necessitated by this global pandemic.

Dr. Vasif Huseynov is Senior fellow at the Baku-based Center for Analysis of International Relations (AIR Center). His research interests include hybrid war, soft power, and international security in the South Caucasus and Eurasia.