NY Times: In Azerbaijan, a String of Explosions, Screams and Then Blood 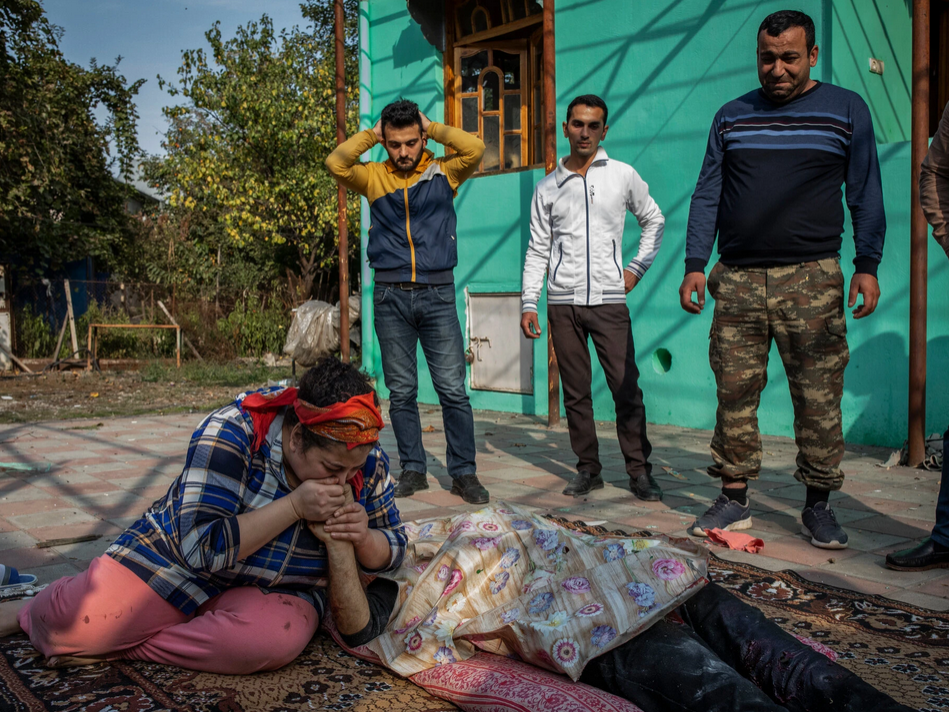 Caught in an Armenian rocket attack, a New York Times reporting team captures the agony of an expanding, dirty war.

BARDA, Azerbaijan — The first explosion was loud enough to make us stop the car. It seemed close and sounded like a rocket, so we quickly jumped out and crouched down by a wall.

If we hadn’t stopped, I later realized, we might have driven straight into one of the blasts, a scant 20 yards up the road.

At the time of the blast on Wednesday, we were driving along the main street of the provincial town of Barda, Azerbaijan, toward an intersection. Azerbaijan is at war with Armenia, but the frontline was 20 miles away and life to that point was going on uneventfully in the area. Women were out shopping, men were filling their cars at the gas station.

Then, a string of deafening explosions sounded in rapid succession, each one seeming closer and louder. A woman started shrieking. A man bellowed at his family. They rounded the street corner, his wife pulling the sleeve off one of her children, and they all dashed down a side alley.

Across the road, blood smeared the steps into the basement of a private health clinic. Inside, a taxi driver, bleeding heavily from the leg, was being treated. Nurses, patients and passers-by huddled in the basement, stepping around the blood, calling their families on their cellphones.

I am in Azerbaijan with a photographer, Ivor Prickett, to cover the war that broke out last month between Azerbaijan and Armenia. It was my first time back in more than 20 years, yet coming under rocket fire was not unfamiliar — the Caucasus region has been wracked by half a dozen conflicts since the disintegration of the Soviet Union.

The conflict between the two countries began in 1988 over the territory of Nagorno-Karabakh, an Armenian populated region inside Azerbaijan. By 1994, Armenia had made major territorial gains, driving nearly a million Azerbaijanis from their homes, but the war ended without resolving the issue.

In Azerbaijan, a string of settlements close to the frontline have suffered almost daily rockets strikes. The attack on Barda, which lies slightly further from the frontline, appeared to be an escalation. 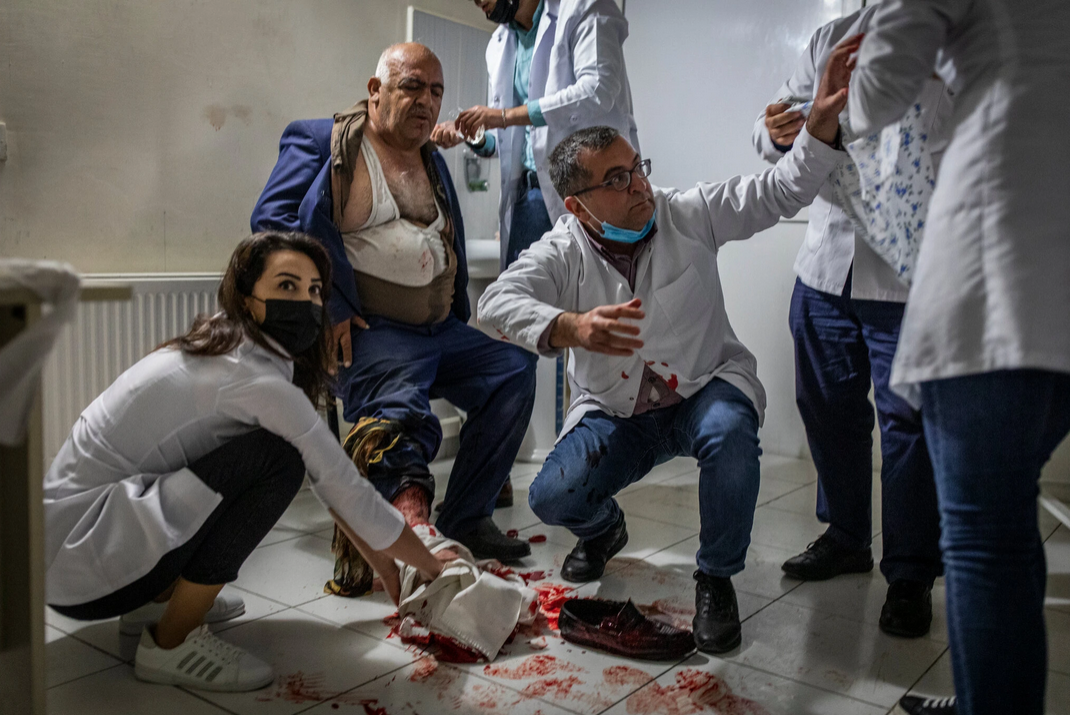 “You see what the Armenians are doing to us,” Kamil Kerimov, 55, shouted. “Do you see someone from the military here? Why are they doing this? You see only civilians.” He added: “They want to create chaos.”

Yagubiya Hamidova, 44, a cardiologist taking shelter in the clinic’s basement, had moved recently from the frontline town of Terter, thinking it would be safer here. “Please help us,” she said. “No one in the world knows what is happening to us.”

Outside at the intersection, a burned-out car was still smoldering. Blood was smeared on the sidewalk and at the door to an office building, amid shattered glass. Bomb disposal officers in coveralls and visors stood over pieces of exploded ordinance.

We piled into the car and began driving out of town but came upon another scene of carnage at the very next intersection.

Wrecked cars stood at awkward angles. Someone had draped blankets over bodies inside two of the cars. A pair of shoes and more blood lay on the ground beside another vehicle. The road was blackened and the air smelled of explosives.

“Why did they do that to him?” wailed a woman in black, as two men supported her on each arm. “People! Please look at what they are doing. Why did they kill him? Please God, help us.”

Rescue workers levered open one of the car doors with an iron bar. As they lifted the blanketed form out the woman sank to the ground. “My baby,” she cried. 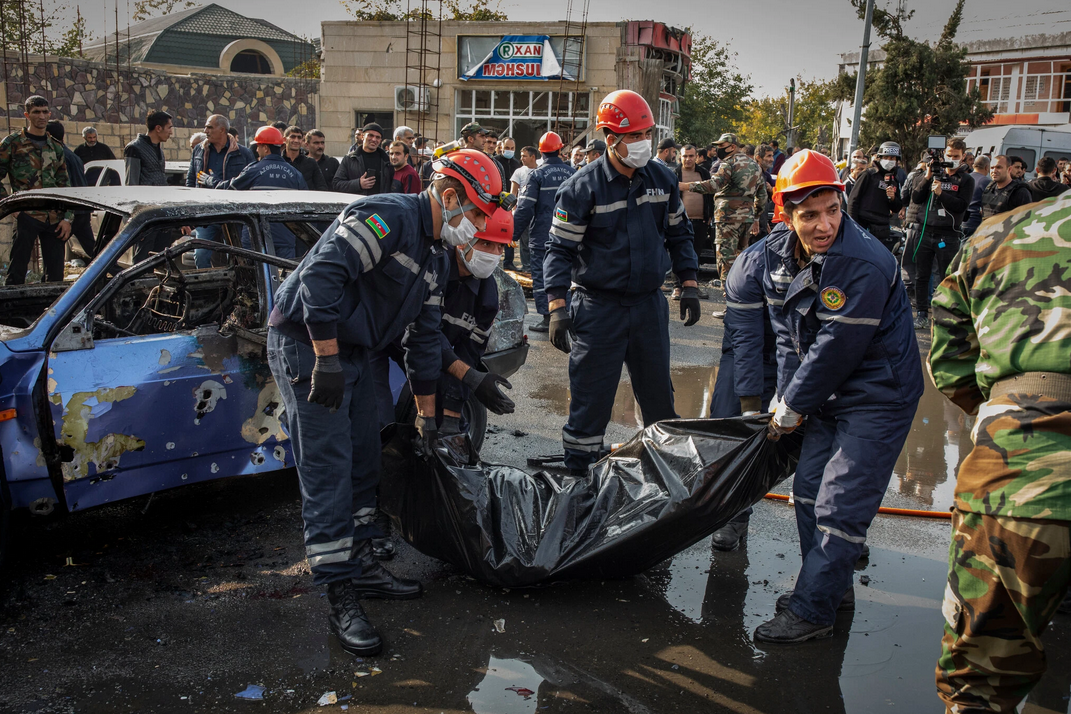 Across the street two more people had been cut down on the sidewalk. A man and a woman, they lay under blankets amid broken branches and fallen leaves.

One was Fuad Izmayilov, 31, a sports teacher, who died just outside the gate to his mother’s house.

Grief stricken, blood smeared on her face, his mother cradled his head and wept.

“He was coming to tell us something was happening, and he died,” said his mother, Tabiat Izmayilova.

A widow, Ms. Izmayilova said she was a refugee from Armenia, among the Azerbaijanis who left the country when the first war broke out more than 30 years ago. “I have lost everyone, and now this.”

She bemoaned that she had not seen her son married, and said she had planned to decorate the house for him to live in when he did wed.

“Why did you do this to us?” she asked aloud. “Armenians, don’t you have children?” 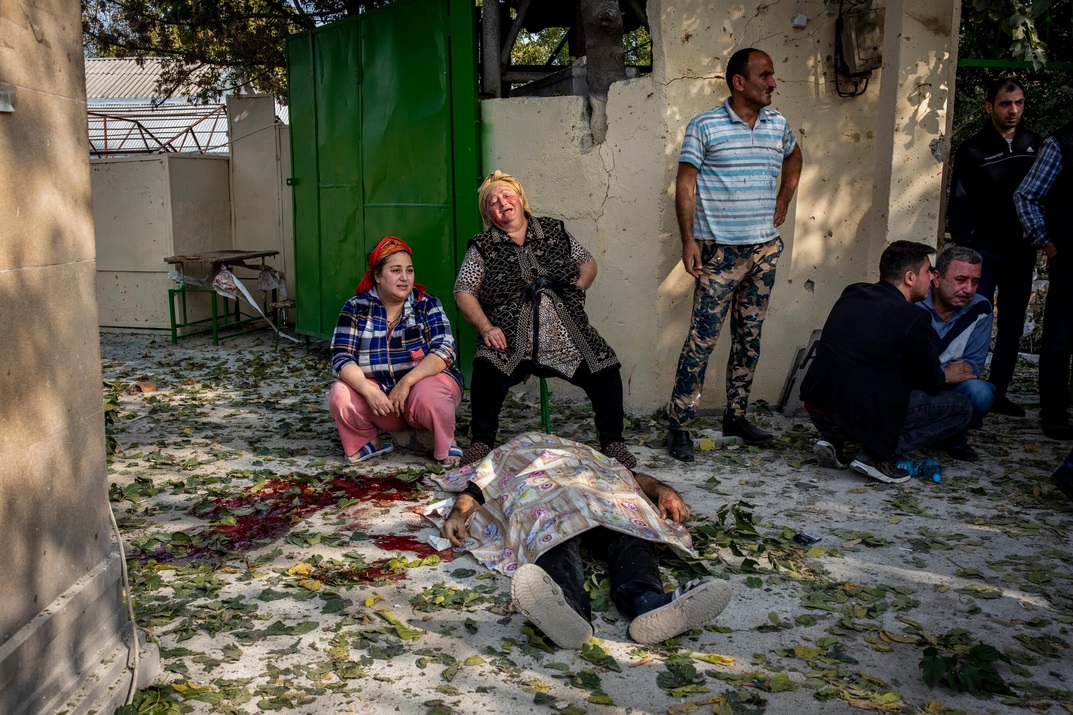 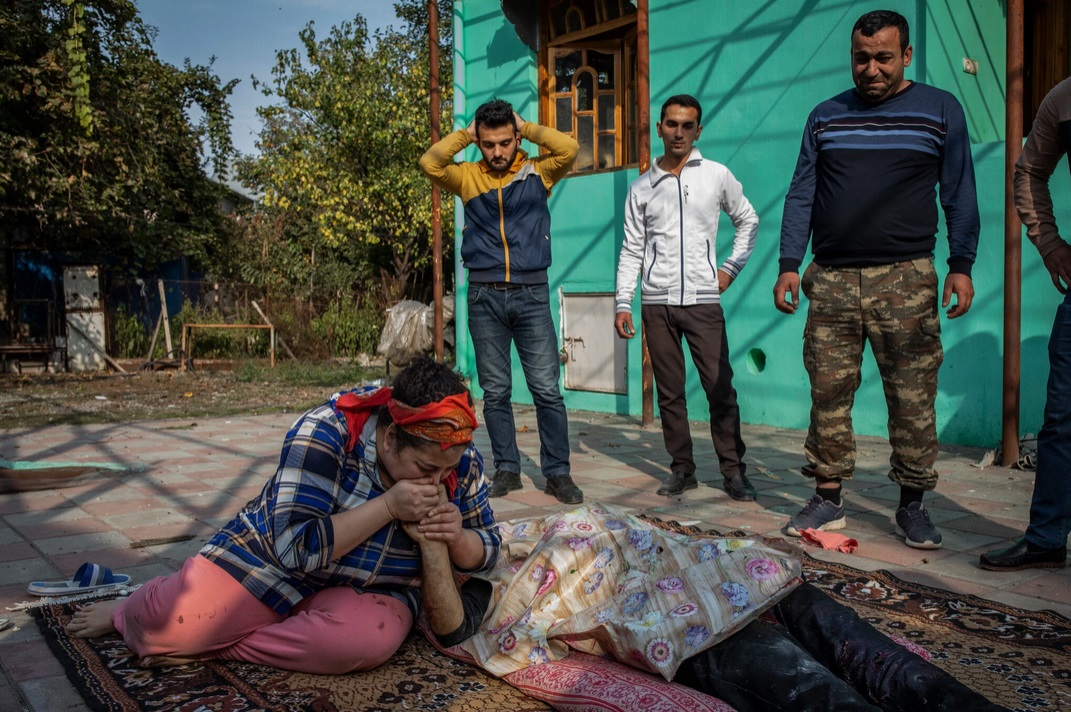 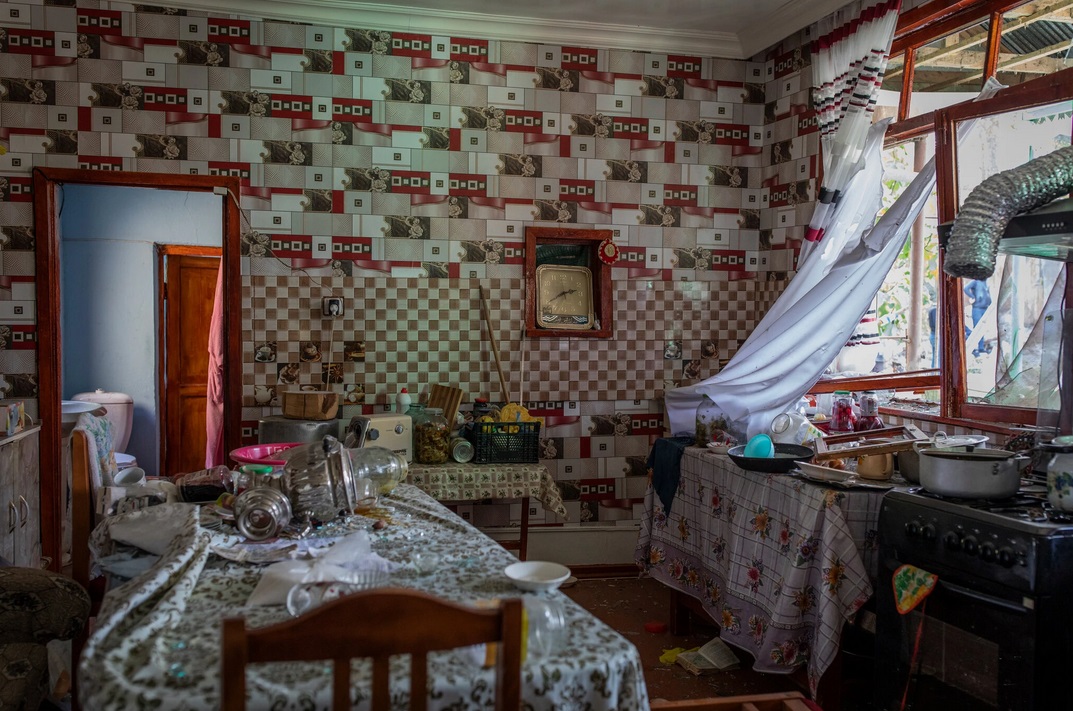 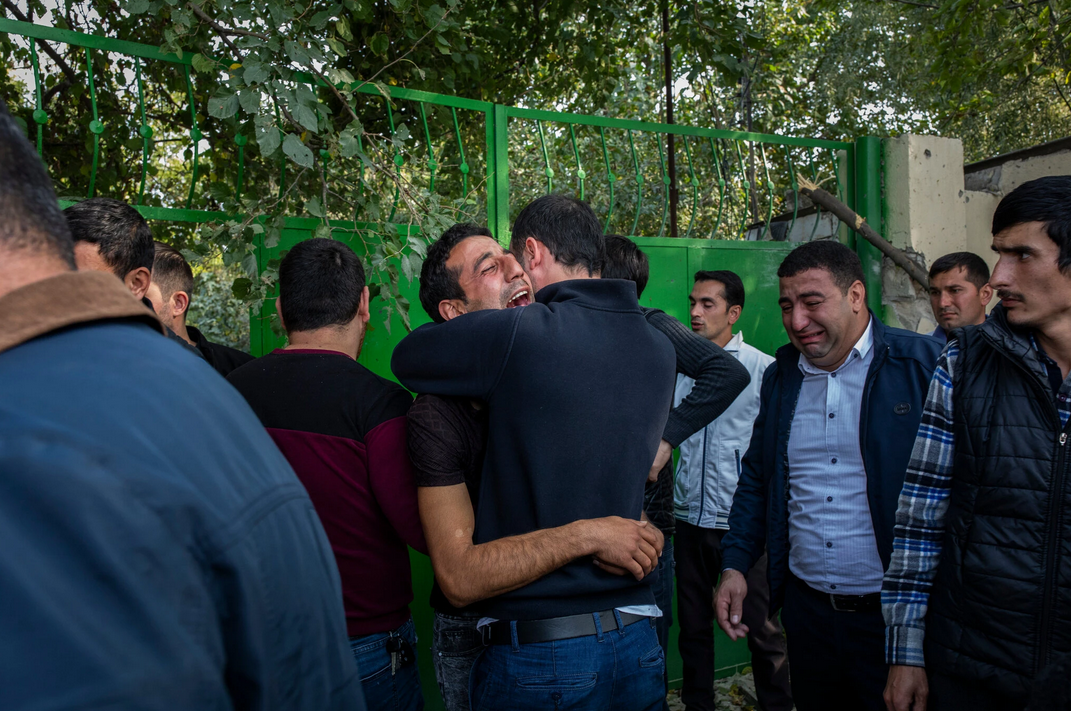 There is every sign that the war is escalating and casualties are mounting.

In all, 21 people died in downtown Barda in the rocket strike and 70 people were wounded, the government said in the evening, adding that the rockets were fired from a Russian-made Smerch multiple-rocket system and unleashed cluster bomblets. Designed to be used against armies in open spaces, cluster bombs are banned in much of the world because of their danger to civilians in residential areas.

Armenia denied responsibility for the attack.

In the morning, we had visited Garayusifli, a sleepy farming village just outside Barda, where people were burying victims of another rocket attack. Four people died, including a 7-year-old girl, and more than a dozen were wounded. Children had been playing on their bikes, and their parents sitting in the shade of their gardens, when the missile exploded, scattering cluster bomblets over the houses of several neighbors. 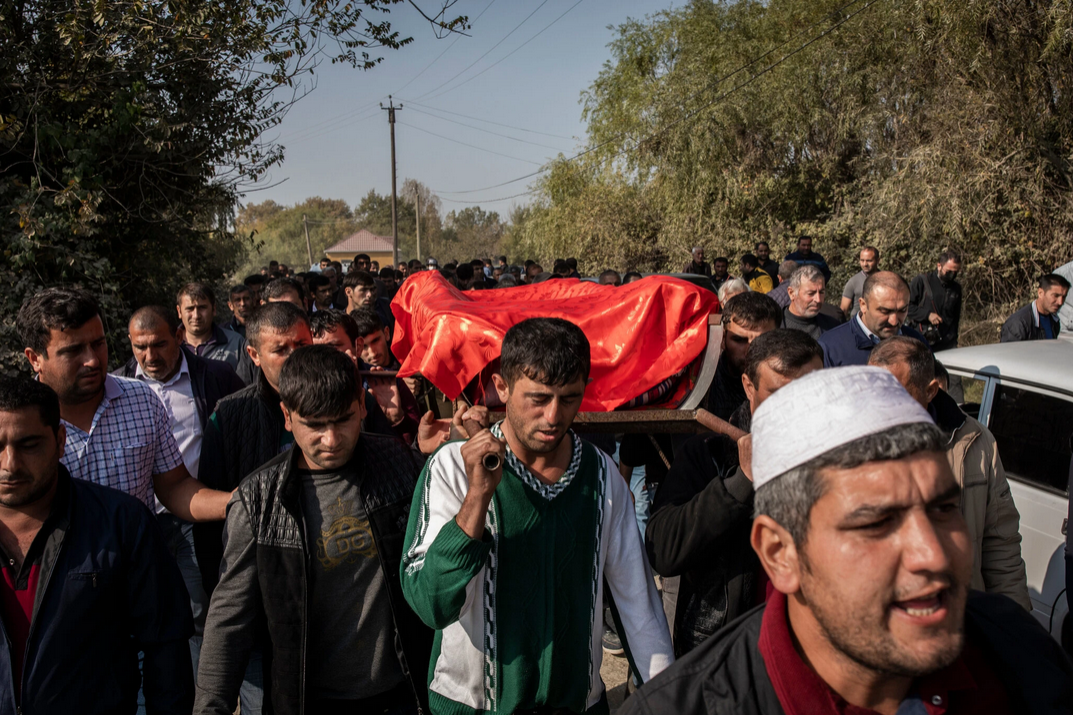 In Barda, some of the wounded being treated in the city’s hospital said they had first heard an explosion that seemed some distance away and then heard what they said were cluster bombs falling.

Zergelam Aliyeva, 18, said she thought the first explosion was an air defense mechanism hitting down the missile. “Then we heard the clusters coming down. They made a sh-sh-sh sound and then they started raining shrapnel on us.”

“When I heard the sound I laid down on the ground,” she said. Her friend, Aysun Ismayilova, 15, lying in the next bed, suffered worse injuries. “She ran away and it landed in front of her,” she said.

“We could not believe they could fire on our village,” said Elnure Karimova, 17, who was also wounded, “because there is no military, only civilians.”

Carlotta Gall is the Istanbul bureau chief, covering Turkey. She previously covered the aftershocks of the Arab Spring from Tunisia, reported from the Balkans during the war in Kosovo and Serbia, and covered Afghanistan and Pakistan.