This month Baku and Moscow have come to odds at what has always been a thorny issue in Russia-Azerbaijan relations: arms shipments to Armenia.

Over the last two decades, Armenia and Azerbaijan have both purchased arms from Russia, yet Azerbaijan always bought the equipment at market prices while Armenia has enjoyed subsidized arms deals from its northern ally. In the past, Armenia has also reportedly received free military hardware from Moscow.

What’s different this time is that the shipments were reportedly made during a heated phase of hostilities between Armenia and Azerbaijan, suggesting that Russia was encouraging and enabling Armenia to attack Azerbaijan.

In his phone conversation with Russian President Putin two weeks ago, Azerbaijani leader Ilham Aliyev expressed concerns over delivery of 400 tons of military equipment and ammunition to Armenia.

A series of IL76 military cargo plane flights from Russia to Armenia through Kazakhstan, Turkmenistan, and Iranian airspace, circumventing a direct route over Georgia, were tracked and reported through Flightradar24.

So, what stands behind Russia’s dangerous move in South Caucasus? Why is Putin upping the ante in the Armenia-Azerbaijani conflict? There seem to be a few reasons.

Summer’s been busy on the Arbatskaya Square, the grounds of the headquarters Russian ministry of defense. In the last few months, Russia sustained rather embarrassing defeats on the Syrian and Libyan fronts, where Moscow supports a miraculously surviving dictator Bashar Al-Assad and the ever-belligerent warlord Khalifa Haftar, respectively. One regional power that was able to strip Russia from its advances in the Mediterranean region is Turkey. Through its skilled political maneuvering and high-tech drone war-making, Ankara brought Russian political designs to a standstill, if not evaporated them altogether.

In Syria, Turkey has secured its 20-mile safe zone and pushed south, eventually forcing Russia into a ceasefire agreement and joint patrols favorable to Ankara. In Libya, following President Erdogan’s pledges to support the UN-recognized legitimate government in Tripoli, Turkish military inflicted systematic blows to Haftar’s forces, but most importantly, to Russian mercenaries dispatched to aid in the advance on Tripoli. Also known as Wagner Group, a private Russian military contractor, they numbered up to 1,600 souls on the ground when they were forced to immediately disband and evacuated back to Russia. So dire was their condition, that their retreat is said to have been agreed upon with official Ankara to avoid their complete annihilation.

In Europe, Russia continues to lose its position in the energy market.

In mid-July, Secretary Pompeo announced sanctions against investors who would be contributing to the construction of Nord Stream-2 and second line of Turkstream that would increase Kremlin’s leverage over Europe. That, however, is not the only detrimental step against Russia. Turkey, as a large natural gas market for Russian energy giants, has also decreased imports from Russia, giving a bigger market share to Azerbaijan. In March, for example, Turkey imported 924 million cubic meters of gas from Azerbaijan, comprising 23.45 percent of total gas imports to Turkey, thus pushing Iran and Russia down as the second and third largest exporters to Turkey, respectively.

These political defeats and losses in the energy markets raised serious concerns in Kremlin. To respond to the growing crisis from within, and to disrupt the flow of hydrocarbons to the West, Russia employed what it always did best – instigation of conflict and destabilization of the region where Turkey is involved one way or another, and where lie energy pipelines transporting oil and gas to the West. 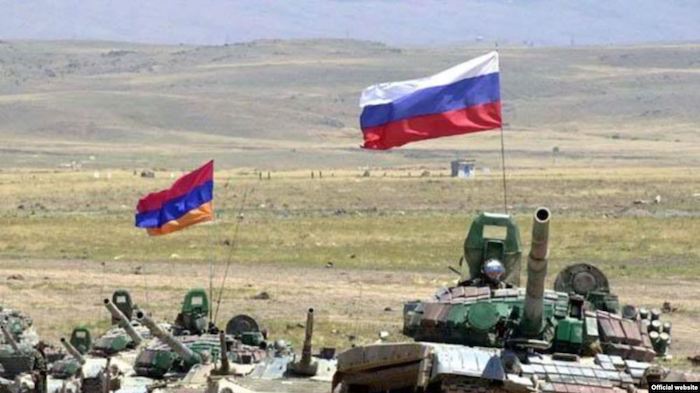 As a result of two-week fighting, 16 Azeri servicemen, including a major general, colonel, and one civilian, and four Armenian soldiers died. The short war involved heavy artillery shelling of each other’s positions and high-tech drone strikes. While Russia’s involvement in these hostilities is not official, all circumstantial evidence points to Moscow.

As a key Russian military ally, Armenia gets a favorably selective treatment when it comes to arms sales. Following the Russian-brokered ceasefire agreement between Armenia and Azerbaijan which halted the Nagorno Karabakh war in 1994, Russia has systematically supplied Armenia with free military equipment to consolidate Yerevan’s territorial gains in occupied territories of Azerbaijan.

By the late 1990s, Russia has reportedly illegally provided its ally with $1 billion worth of weapons. In the following years, Moscow extended several loans to Yerevan to help with purchasing sophisticated Russian arms Iskander missiles that can reach oil and gas infrastructure in the Caspian Sea. No wonder why Armenian leaders have consistently threatened to strike energy infrastructure in Azerbaijan if the hostilities resumed.

Armenia hosts Russia’s 102nd military base in Gyumri and the 3624th Air Base at the Erebuni Airport in Yerevan. Apart from that Russian troops protect Armenia’s borders, thus allowing full control over nominal independence of official Yerevan. 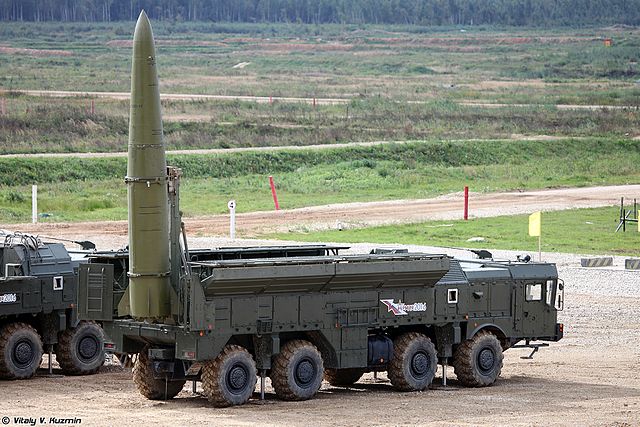 The 9K720 Iskander is a mobile short-range ballistic missile system produced and deployed by the Russian Federation. (c) Wikipedia

During the latest Armenia-Azerbaijan clashes in Tovuz district, Russia reportedly held joint military exercises with Armenia sending an easy-to-decipher message to Azerbaijan that Russia will not think twice about undermining Baku should it continue to compromise Russian energy politics, and to Turkey – that Russia is in position to choke the so-called Ganja gap through which lay numerous pipelines transporting hydrocarbons to Turkey and on to Europe.

Therefore, Russia’s latest actions in large arms shipments to Armenia should come as no surprise. First and foremost, Moscow is seemingly equipping its client state with more sophisticated offensive weaponry that will enable it to sustain a long term campaign against Azerbaijan. That potentially includes new equipment to shoot down Azerbaijani drones, which was also a part of the latest joint military drills. Second, Russia seeks to establish a more grounded presence to counter Turkey in South Caucasus. That’s also why Turkey’s unequivocal support to Azerbaijan is a lot more pronounced than ever before. With Ankara’s victories in Syria and Libya, Turkey is in a favorable position to gain more geopolitical points by extending its presence to the Caucasus by pressuring Russia and supporting Azerbaijan. Although Turkey has always supported Azerbaijan in its conflict with Armenia – Ankara closed borders with Armenia in April 1993 in opposition to Armenia’s occupation of Kelbajar district – the current supportive overtures of Erdogan government are very telling. 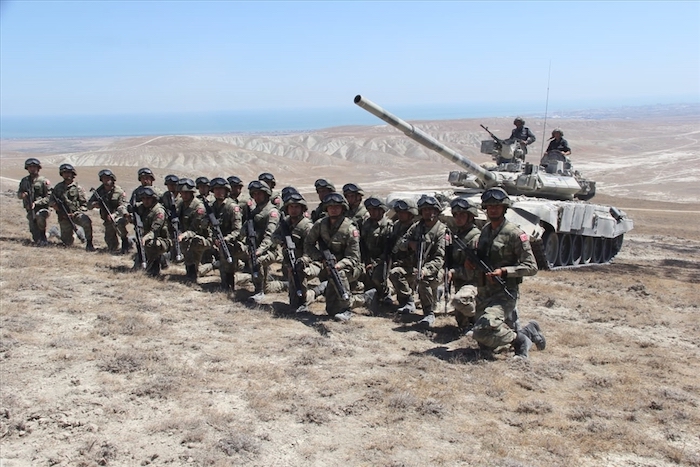 Following the start of hostilities in Tovuz district, President Erdogan made it loud and clear that “Turkey will never hesitate to stand against any attack on the rights and lands of Azerbaijan”, and sent a large military delegation with high ranking military officials including the minister of defense Hulusi Akar and Chief of General Staff Yashar Guler to Baku, in a show of solidarity with their ethnic cousins, and most importantly, to the flag for President Putin that any designs that would undermine Turkey’s geopolitical ambitions in the region would result in embarrassing defeats a la Russian retreat in Syria and Libya.

In a show of force, Turkey and Azerbaijan held joint military exercises from July 29 through August 10 in several districts, involving more troops and more military equipment than ever before. As many as 11,000 Turkish troops had reportedly arrived in Azerbaijan to take part in the drills.

Following reports of Russian arms shipments and the visible hand of Moscow in the Armenia-Azerbaijan conflict, many Azerbaijani political commentators have called for Turkish troops to remain in Azerbaijan. A group of demonstrators held a rally in front of the Turkish embassy in Baku calling for an establishment of a Turkish military base in order to counterbalance growing Russian intolerance and imbalance in the region.

Turkish President Erdogan and President Putin also spoke on the phone agreeing to “coordinate efforts for stabilization in the region”. To mend ties, Moscow eventually sent its defense minister Sergei Shoigu to Baku. While meeting the Azerbaijani president, Shoigu made a rather ridiculous statement saying that the IL-76 planes were transporting “construction materials” for reconstruction works at the Russian military base in Gyumri. The evidence and tracking say otherwise. If those were just construction materials, why would Moscow not ask Georgia or Azerbaijan for overflight rights, if the materials were destined for reconstruction works only?

Moreover, the tracking through Flightradar24 also showed that after a stop-over and delivery to Yerevan, one airplane continued to Latakia airbase in Syria. Is Russia transporting construction materials to Syria, too? What’s in the works, one might ask? The more unpredictable Russia seems the more cautious everyone in the region must be.