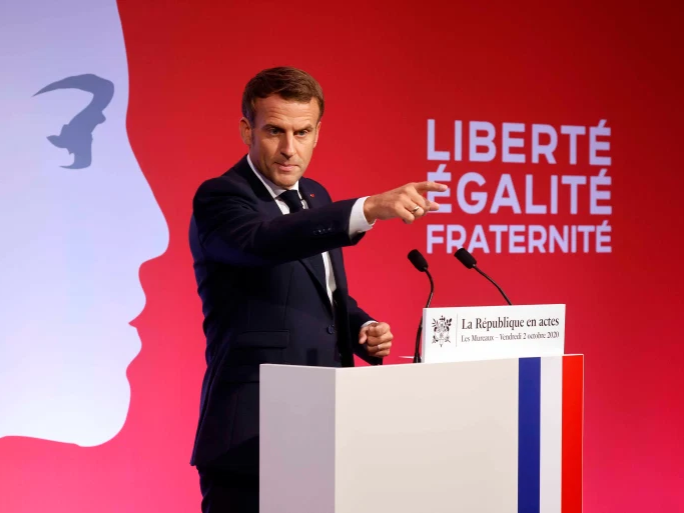 Macron is demanding Muslims give up their religious values at a time when secular France doubts its own values.

The “Muslim question” today is fast becoming what the “Jewish question” was in 19th-century Europe. Negative attitudes towards Islam and Muslim communities are increasingly setting limits to religious tolerance, pluralism and democracy.

French President Emmanuel Macron appears to have consciously taken the lead in launching a secular crusade to “save the soul of Europe” but his actions are misguided because they play right into the hands of the extremists he purports to target. Publishing sacrilegious and tasteless cartoons of the Prophet of Islam and doubling down on them is not defending freedom of expression; it is an extremist action in its own right.

As University of Pennsylvania scholar Anne Norton notes in her brilliant book, On the Muslim Question, the Jewish question in the 19th century was a test for the Enlightenment values of reason, tolerance and inclusivity. It was only by treating Jews, subject to centuries of discrimination and persecution, as equals that Europe could have claimed to be a civilisation based on reason, virtue and freedom. Today, the treatment of Islam and Muslim communities in the West is a litmus test for the democratic and pluralistic values Western societies claim to espouse.

The streak of violence that we have witnessed over the last few months in Europe heralds a new and dangerous episode in the modern history of religious and secular extremism: As absolutist ideologies, they both want to impose their will on the world and do not shy away from victimising everyone along the way. Extremism and absolutism in their religious and secular forms recognise no ethnic or religious boundaries.

By declaring that “Islam is in crisis all over the world” and defending the re-publication of the Charlie Hebdo cartoons of the Prophet of Islam, Macron not only creates new opportunities for ISIL, al-Qaeda and similar groups to recruit and escalate violence, but he also offends the entire Muslim world.

Asking others to give up on their religious values because you have lost them does not make your politics any more reasonable or respectful. For Muslims, Prophet Muhammad remains the most sacred and revered person regardless of how much secularism, modernity, Enlightenment or technological progress shape the places they live. Respecting this is not a compromise to violent extremism but a moral and political duty.

Macron may seek some political advantages in championing a new secular crusade against Islam and presenting the Muslim minority communities as “the other” of Western civilisation. But this quest will not help alleviate the crisis that his country and others in the region find themselves in.

He calls for a reform of Islam so it would conform to the “values” of the French Republic at a time when his society has lost belief in these very values. Self-doubt, however, does not seem to deter deep-seated imperialist impulses.

If it was only a matter of Macron acting with a sense of political vengeance, things would have been easier to settle, but it goes deeper than that. His behaviour and rhetoric reflect post-Enlightenment rationalist arrogance – a mindset that seeks to salvage Western rationalism from its ruins by attacking Islam and Muslims as the antithesis of the modern secular world.

This brute secularism and Euro-centrism is part of the problem. How can one otherwise explain calls for a “French Islam”, whatever that is, when we hear no such calls for French Christianity, French Judaism, French Hinduism, etc?

Macron may or may not get what he wants but the political trenches he has dug himself into will only undermine further the political mainstream which is already under a constant attack from the far right in Europe. If this is the spirit of Macron’s politics, it is certainly a far cry from the more thoughtful and interpretive politics of the French philosopher Paul Ricoeur under whom Macron studied in university.

Muslims across the world condemn and denounce the extremists and terrorists who manipulate their religion in the name of fighting the evils of the modern secular Western culture. As a Muslim, it is my duty before anyone else to reject the brutalisation of my faith at the hands of a few violent extremists. I have to fight against the social and religious environment that produces the likes of ISIL, al-Qaeda, and other terrorist groups that kill more Muslims than any other group and hurt Islam more than any other adversary. There is no ambiguity here.

But the publication and sanctioning of the Charlie Hebdo cartoons by the political elites in the name of freedom of expression is another form of violence against the hearts and minds of all Muslims around the world. It only raises the walls of separation between Islamic and Western societies. It deepens the sense of mistrust at a time when we badly need mutual trust.

Speaking out against this form of violence is not whitewashing the crimes of the terrorists in France, Austria and elsewhere. It is a civic and political duty to reject extremism in all of its forms whether religious or secular. Yes, violence breeds violence. We must break this vicious cycle in all of its forms.

The so-called “Muslim question” of present-day Europe will not be solved by waging new secular crusades. It requires wiser politics, a true sense of respect towards the other and a more serious consideration of our shared values and common future.

Ibrahim Kalin is the spokesperson for the Turkish presidency.