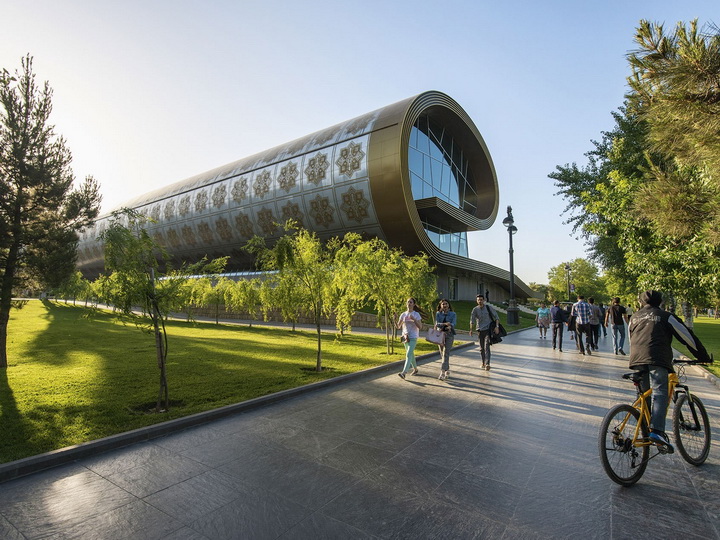 With a medieval quarter that preserves Silk Route traditions and a modern, ever-evolving core, the Azerbaijani capital is something of an enigma, even to regular visitors.

I’d never leave this neighbourhood,” says Musa, blithely tossing a pair of dice onto the backgammon board in front of him. “It hasn’t changed much, and I like that.”

The 75-year-old retiree, who’s lived in Baku’s Old City all his life, is sitting on a rug in one of the historical quarter’s many winding, cobbled alleys. His legs are crossed, his shoes are off and he’s slowly sipping black tea with a slice of lemon. The very suggestion of living anywhere else is met with a resounding tut. Behind us is a rusty parked Lada, draped in a rug. Two luxuriantly moustached men are leaning against the bonnet — one plucking at amber prayer beads, the other chomping on sunflower seeds, which come wrapped in newspaper. Above our heads, a woman in a paisley headscarf hangs her washing on the balcony, eavesdropping on our conversation. Maiden Tower, a 12th-century monument, stands majestically a few yards away, and we can hear the clamour of nearby Kichik Gala, a street lined with traditional restaurants and rug shops.

This is the slow-paced, placid side of the city that Musa and many others know and love. But outside these 12th-century walls, rapid gentrification is forging a very different Baku. For more than 70 years, up until 1991, Baku bent to the will of the USSR. The past decade, meanwhile, has seen a wealth of new hotels, architectural marvels and shopping complexes, all integral to its rebirth. In 2010, Fountains Square, the city’s lush piazza, received a facelift and now abounds with boutiques, restaurants and shady benches with gossiping locals. Two years later, Baku hosted the 2012 Eurovision Song Contest, held in the purpose-built Baku Crystal Hall on the harbour of the Caspian Sea. The cityscape hasn’t stopped growing since. That same year, the abstract, meringue-like whirls of Zaha Hadid’s Heydar Aliyev Center became a soft addition to the city’s skyline of Soviet-era mass housing. Soon after, the likes of Formula 1 and UEFA caught wind of Baku’s potential as a moneyed host; there have also been bids, albeit unsuccessful, for the city to stage the Summer Olympics. But there’s no subduing the splendour of the Flame Towers, a trio of skyscrapers that lights up the city each night with 10,000 LED screens — a nod to Azerbaijan’s ‘Land of Fire’ moniker and its heritage as the crucible of Zoroastrianism, the ancient fire-worshipping religion.

The past few years have also seen the emergence of platforms for young, artsy Bakuvians — a naval base has been converted into an exhibition space, galleries have opened up in the Old City and the old-school Baku jazz scene is slowly making a comeback. Growing up in Baku during the 1990s, the country was fresh out of austere, communist hands. Today, even to me, it’s a puzzle — a confounding mix of Azeri, Russian and Turkish in the Caucasus. It’s trendy and traditional, Asian and European. By day, you can explore ancient troves from the Silk Road era, by night, stroll the boulevard and feel like you’re in an exciting metropolis. Old City: Known locally as İçəri Şəhər, the Old City is Baku’s well-preserved medieval quarter. Mount the narrow steps of the former fortress, Maiden Tower, for sweeping views of the city and its crescent-shaped harbour. Wander further inside the ancient city walls to Shirvanshah Palace — the sprawling religious complex that was home to northern Azerbaijan’s ruling dynasty in the Middle Ages — to explore its main courtyard, bath house, burial vaults and mosque.

Boulevard: Baku’s beloved Boulevard, or Dənizkənarı Bulvar, has been a local haunt for more than a century, and it’s where you’ll find city-dwellers strolling, rollerblading and chatting come evenings and weekends. The leafy promenade has grown over the years to approximately two miles long, stretching from National Flag Square to Freedom Square. It features everything from a multistorey shopping centre to a Ferris wheel.

Azerbaijan Carpet Museum: The country has an enduring love affair with carpets. This three-storey seafront museum is the work of Austrian architect Franz Janz and is shaped, quite impressively, like a giant roll of carpet. Get lost among thousands of Azeri carpets, national garments and traditional ceramics, and catch one of the regular exhibitions by local artists.

Contemporary art: Inside a converted 1960s naval building, YARAT Contemporary Art Space is a not-for-profit hub founded in 2011 by artist Aida Mahmudova. In the Old City, check out YAY Gallery and Kichik Galart for local designs, then head to Heydar Aliyev Center — even if only to admire the jaw-dropping exterior.

Nizami Street: This pedestrianised street is a two-mile stretch of boutiques, restaurants and souvenir shops housed in baroque and art nouveau-style architecture. The grand Azerbaijan State Academic Opera and Ballet Theatre regularly stages performances like Leyli and Majnun, a heart-breaking story of two lovers penned by 12th-century poet, Nizami Ganjavi. The ornate facade of the Nizami Museum of Azerbaijan Literature is best admired at night.

Land of Fire: Don’t miss Atəşgah (Fire Temple), once a site of Zoroastrian, Hindu and Sikh worship. Yanar Dağ is a flaming gem, too: the hillside fire is said to have been burning for 4,000 years -— a sight so entrancing that Marco Polo wrote about it when he visited in the 13th century.

Gobustan National Park: Dancing stickmen, a headless pregnant woman and a rampant goat are among the freakish prehistoric petroglyphic sketches in Gobustan, an hour’s drive from central Baku. This rocky, arid expanse is also home to 400 mud volcanoes — more than any other country. Sehrli Təndir: This low-key, rug-draped restaurant in the Old City is one of the few places in Baku where locals will queue for lunch. Alongside clay-baked təndir bread, try dolma (stuffed vine leaves) and a side of motal (hard goat’s cheese), washed down with dovğa (a yoghurt drink with herbs).

Passage 1901: This converted bazaar serves up mouth-watering meats, shish kebabs and salads. The decor is reminiscent of a Soviet-era house, with books, relics and furniture from communist times found all around the courtyard. Downstairs, tea is served out of coal samovars, and there’s live music most evenings. 20 Nigar Rafibeyli.

Muğam Klub: This open-air restaurant offers a menu of signature Azeri dishes like grilled kebab, səbzi plov (lamb and rice with leek and herbs) and qutab (thin dough with cheese and spinach). Go in the evening for a performance of muğam — melancholic Azerbaijani folk music — then head upstairs to explore the souvenir shops. 9 Haqiqat Rzayeva. Thousands of tiny books — including one that’s a nanoscopic 0.75mm by 0.75mm — are on display at Baku Museum of Miniature Books. Bring specs or a magnifying glass.

ROOM: Cosy and laid-back, with a pinch of hipster — this place is Baku’s answer to a Shoreditch wine bar. A few feet from Fountains Square, ROOM is a local’s haunt that’s buzzing by night. It offers great Azerbaijani and international wines.

Beerbaşa: This upmarket yet relaxed sports bar is a short funicular ride from the centre and serves some of the best beer in town. Centred around a microbrewery, it offers a selection of pale and dark beers and ales, and a menu including seafood, fries and German-style sausages. Tea time: You’ll find çayxanalar (tea houses) all across the capital, and the drink is often served with a side of mürəbbə, a sweet fruit preserve. Head to Çay Bağı 145 in the Old City for a glass or two with a sea view, or duck into the movie-themed Coffee Moffie behind Fountains Square.

Life’s a beach: A 45-minute drive northeast of the city centre is Bilgəh, Baku’s most popular beach, which is free to access and has umbrellas and chairs available to rent.

Hammam culture: Ağa Mikayil Hamam is your best shot if you’re after the most authentic, skin-renewing scrub.

Sweet thing: One of the nation’s favourite sugary treats is şəkərbura, a crescent-shaped pastry stuffed with sugar, nuts and a pinch of cardamom. Paxlava, or baklava, is ubiquitous across the country. In the summer, find a street-side vendor selling plambir — a simple, delicious ice cream from Soviet days. Despite a ban during Soviet rule, Baku witnessed a boom in jazz music in the 1960s and ’70s, when composer Vagif Mustafazadeh combined it with traditional muğam folk music to birth a hybrid genre.

Bazaars: Loud, colourful and thronging with noisy stall-owners and bargain-hunting shoppers, bazaars are an integral part of daily life in Baku. The sprawling Yaşil Bazar (Green Market) is the city’s largest, selling fruits, spices and pickles. Keşlə and Təzə are also popular with locals. Beware, English isn’t widely spoken at bazaars, but hand gestures will suffice.

Labels: If the likes of Gucci and Dior are your thing, head to Neftçilr Avenue opposite the central Boulevard. ‘Neftçilər’ means ‘oilmen’ in Azeri — in 1961, the road was so named to commemorate those working on oil rigs. Today, it’s a showy stretch of international brands, but you’ll also find Baku Puppet Theatre and Government House here.

Antiques: Discerning antiquarians should head to the Old City to find authentic Azeri gems like a kilim rug from Quba (the area famous for its ancient art of carpet weaving) or traditional samovars and copperware.

Sahil Hostel & Hotel: Small on budget but big on location, this friendly, colourful hostel is situated just metres away from the Boulevard. Dorm rooms are available for up to 10 people, and there are also private rooms with en suite bathrooms and balconies.

Seven Rooms Boutique Hotel: Set within the Old City walls, this hotel is near the Maiden Tower, Shirvanshah Palace and some of Baku’s best restaurants. Rooms are light, modern and comfortable, and there’s a complimentary buffet breakfast thrown in.

Four Seasons Hotel Baku: The creme de la creme of Baku hotels, the beaux-arts-inspired Four Seasons sits on the affluent Neftçilər Avenue. The lobby is the show-stealer, with marble floors, a grand staircase and opulent chandeliers. Getting there and around

Azerbaijan Airlines has the only direct flights from Heathrow to Heydar Aliyev International Airport, operating three times a week. Airlines offering flights with a stopover include Turkish Airlines and Emirates.

Baku has a sufficient bus, metro and taxi system, but the city is best explored on foot. A BakuCard available in a 24-hour, 72-hour or one-week format offers free/discounted entry to a selection of museums and attractions, as well as free public transport across the city. Prices start from 24AZN (£11).

Temperatures in the summer can reach over 40C (although the breeze from the Caspian Sea helps). The best months to visit are April-June and September-October, when there’s little chance of rain and temperatures are cooler. In March, celebrations take place across the city to mark Novruz — the coming of spring.

Published in the October 2019 issue of National Geographic Traveller (UK)